"Oscar Curse" or new discussions for your relationship?

I've been reading all the scandalous gossip swirling around Hollywood's sweetheart, Sandra Bullock and her not so sweet husband, Jesse James. His alleged affair with tattoo model Michelle "Bombshell" McGee is a nauseating, overwhelming, and completely un-shocking chapter in the world of guilty pleasures. But as much as I would like to comment on the details, I am already tired of the story. What I do find interesting is the combination of a this "breaking news" in the aftermath of Sandra Bullock's Oscar win as best actress (yes, I know it's officially "actor"), to the interview between Best Supporting Actress Oscar winner Mo'nique and Barbara Walters. 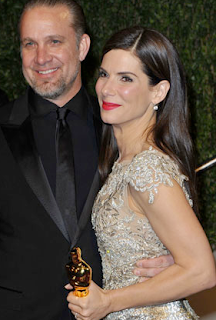 Here's a woman who is confident enough to NOT SHAVE her hairy legs, and says an affair is not a deal breaker in their relationship. I salute the strength and honesty of Mo'nique. I think her attitude and outlook on marriage, especially in Hollywood is a much more realistic approach to the unnatural agreement of monogamy.

Yes, I said UNnatural. Humans are not monogamous by nature. We have been socially programmed to be monogamous as a survival tactic. Long before religion had a say in how we should be committed to one another, evolution played a role in determining the optimal relationship status for humans. Homo sapiens were in danger of becoming extinct, there was a strong desire to procreate and speculation suggests that had early man been monogamous, that inbreeding would have done our species in.

Marriage is a relatively modern concept: a contractual agreement before God and country that two people promise to practice monogamy and remain partners til death. For this promise, they receive status and tax benefits... sounds romantic doesn't it?

Sandra Bullock proclaimed her love for Jesse James, and thanked him at nearly every recent acceptance speech I can think of. She obviously bought into the whole monogamy thing, and yet he allegedly has not. 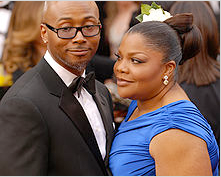 Mo'nique and Sydney Hicks have publicly claimed they have an open marriage. She told Barbara Walters on her Oscar interview that if either of them wanted to have an affair with another person that it would not jeopardize their marriage.

So, for all of you in relationships, I think it's the perfect time to discuss these two award winning actresses and decide which one you'll be. Will you be the lead actor in a role, getting blindsided when you discover that your supporting actor isn't who you thought he was, or will you be happily fulfilled as a best supporting actress to your lifelong partner?

Let's face it folks, there are two kinds of lovers out there, one who is dedicated to and capable of monogamy, and those who aren't. The problem is, most people don't find out if their spouse is on the same page until it's too late. Mo'nique has blazed a trail to openly discuss marriage with your partner. Whether or not you decide to walk down the path to truth is up to you.
Posted by Miyoko at 9:12 PM 2 comments:

The pocket rocket meets it's match-introducing the Masseur, a new vibe from Cal Exotics!

Not for many years has the simple and effective function of the infamous pocket rocket been challenged. Sure there are several slender vibes that boast the power of the pocket rocket, but they've never been able to compete with the design of the easy-to-use, hand-held rod.

Look out beloved rockets, the new Masseur has arrived! 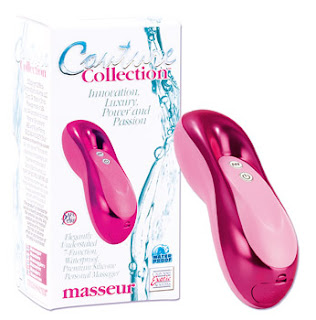 It's sleek, it's waterproof, and it has seven functions of vibrations to give pocket rocket lovers the options they yearned for! The biggest complaint of rocket addicts is the lack of options. There is no low-to-high dial on most models, no choices in vibration or escalation, and rarely could you find one with something other than a hard plastic exterior. The time has come to upgrade your battery operated boyfriend....

The Masseur is made of silicone, has a feather touch button to change functions, and is ergonomically shaped to fit in your hand. (How many times has your wrist felt the strain of lengthy pocket rocket action?) It is powerful enough to stimulate the clitoris, tickle the testicles, or work out a pinched nerve.

Which is exactly what you'll tell the TSA it's for when they pull it out of your bag at airport security.... OOh, and it's available in pink, or black!
Posted by Miyoko at 8:24 PM No comments: