50 Shades Movie Review: from a married, sexually adventurous, mom of a teenage daughter. 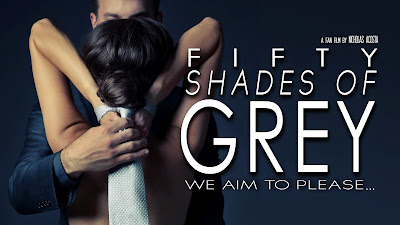 There has been a lot of controversy online about the Fifty Shades of Grey movie. People who feel passionately that it is setting a bad example for our young girls about what a relationship should look like, and what normal sex should be.

I went into the theatre with an open mind to watch the scenes and listen to the dialogue between Christian Grey and Anastasia Steele to see if I felt that it was the abusive, controlling, torturous, sexist relationship that was being described in social media debates.

Here’s what I never saw:

2. Anything other than consensual sex and intimacy between two adults.

What I did see:

2. A woman being pleasured sexually by a man who adored her.

3. A relationship in conflict. Two people trying to negotiate the balancing act of their needs and boundaries.

For those who are saying that it portrays women in a submissive and anti-feminist light:

While Ana’s character is asked to be his “submissive,” She maintains her life outside of the designated play hours. She is asked to “agree” to make herself available to him in whatever way he sexually desires in exchange for her pleasure, and the ability to be in a relationship with him. She is never asked to cook, clean, or otherwise play a traditionally female role in his life. As part of the contract she is required to be exclusive to him sexually, and to be on the pill. She is not expected to give up her free will, but rather, to know that there will be consequences to her actions should she decide to "break the rules."

In a “normal” relationship, women are generally expected to cook and clean, raise children, and work, oh, and have sex exclusively with him, for his pleasure.

For those who say that she is abused, tortured, isolated and humiliated:

Let’s take these one at a time…

From Wikipedia, the definition of abuse

Ana is “spanked” for punishment after Christian warns her “If you roll your eyes at me again, I will take you over my knee.” She of course, rolls her eyes later in the scene, and he lays her over his lap, pulls up her dress and asks her if she understands why he is doing this. After his initial spank, he asks her if she likes it, and then again, if she would like more. Doesn’t sound like “abuse” to me.

Ana is later brought into the Red Room (aka, his play room), where he introduces her to the experience of being teased and whipped with a riding crop while being restrained and blindfolded. Again, he asks her “Does it hurt.” He straps her spread eagle to his four poster bed with ropes and blindfolds her, then continues with some sensory play with feathers and a flogger. At no point in the film does it depict her in any pain until she asks him. “Show me” what the worst punishment would be.

This is the only scene people will or could have an issue with in my opinion. She is whipped on the ass with a leather belt 6 times. He explains exactly what will happen. He tells her she will count the whippings with him. She is NOT restrained or blindfolded. She is shown to appear to be in pain and is crying. However, where the tears are actually being derived from, is left to the viewer.

In the scene leading up to this “punishment,” she is arguing with him. Why he is like this? Why does he have a need to dole out punishments for her at all? And then of course, how severe would the worst punishment be? It is implied that he is an emotionally broken man, that he was abused as a child, and so needs to be abusive in a controlled environment to appease his demons. Her tears could be from the pain of the actual belt lashings, or they could be from her sadness that this man whom she is falling in love with was abused as a child. She could be crying because she is scared of what loving a man like him leaves her vulnerable to. Or she should could be crying because she herself feels unloved by her mother who fails to show up for her college graduation.

Tortured: Um, let’s see… she was given intense pleasure repeatedly… I’ll take some of that torture.

Isolated: Christina Grey introduces her to his family, meets Ana’s mother, is publicly photographed with her, spends time at her apartment as well as his, and refers to her as his girlfriend when the need to introduce her arises. Doesn’t sound very isolated to me.

Humiliated: He holds her hair back while she pukes, never once scolding her for making her own choices, but simply acknowledges that it wasn’t smart. He buys her new clothes to wear because she has vomited all over hers. Buys her a new computer because hers is broken. Takes her for a ride in his helicopter, and an adrenaline fueled ride in a glider. Makes sure she is well nourished. Tells her to never be ashamed of her body, that she has a beautiful body. Bathes her. Spends the night in bed sleeping with her, even though he said he doesn’t “do that.”

I could not find a single instance in the film where Ana is ever made to feel humiliated. It could be argued that she is scolded for not letting him know that she was traveling to see her mother out-of-state, and that he didn’t want her drinking her third Cosmo while she was out with her mom. But at that point in the film, they had already made agreements, expectations were in place, and again, “humiliated?” Embarrassed, perhaps.

For those who ask, “What are we teaching our daughters?”

I will say this. Movies suck as examples of what actual loving relationships look like. Our daughters are exposed to many lofty ideals of what passion, love, romance, and long-term relationships can be. Hollywood generally shows the fantasy fairy-tale as something to strive for… which can lead to serious disappointment. It was refreshing to see a man who knew himself, communicated his needs with authentic clarity, and gave her the ability to opt out. He never offered romance, but he was willing to give her everything else if she agreed. He would fuck her hard, respect, nuture, and care for her. Not a bad proposition if you ask me. I would be thrilled if my daughter encountered a gentleman like this man when she is an adult. A man who was intelligent, present, compassionate, attentive, respectful, and oh yes, wanted nothing more than to spend hours playing with her body and giving her pleasure.

For those who say that this contract was controlling and sexist…

What is Marriage? A legal and binding contract between two people “til death do they part.” And what details are discussed and outlined in this contract? Not much. I would much rather negotiate the terms of my relationship, my sexual pleasure, my physical and emotional health and well-being, than leave it chance based on whimsical lifelong decisions due to “feelings” of love and passion. You can call it cynical, or un-romantic, but you can’t deny the power of honest and open communication.

I’m sure people of the BDSM community will have a field day with this film. It’s very vanilla. It’s ONE fictional account of a POSSIBLE relationship between a Dominant and a Submissive. It barely grazes the surface of what types of sensations could be experienced between two consensual adults with creative minds and willing bodies. I do feel like it may introduce people who may have never considered fantasy play to a few fun scenarios in the bedroom. I hope it will create conversations between couples who want to spice things up, and that men and women will explore what they actually need and desire in their relationships.

What I loved... the actors had real, beautiful bodies, and seemed to play together well on screen. I loved that they both had full bush, which was shown briefly and equally for both actors.

What I hated... that again a girl is conflicted by the potential of "love," that she is incapable of having sex without love. And that Christian Grey has to be a billionaire, perpetuating the ideal that men are there to provide. Oh and... there wasn't enough sex.

But then again, it is just a movie...